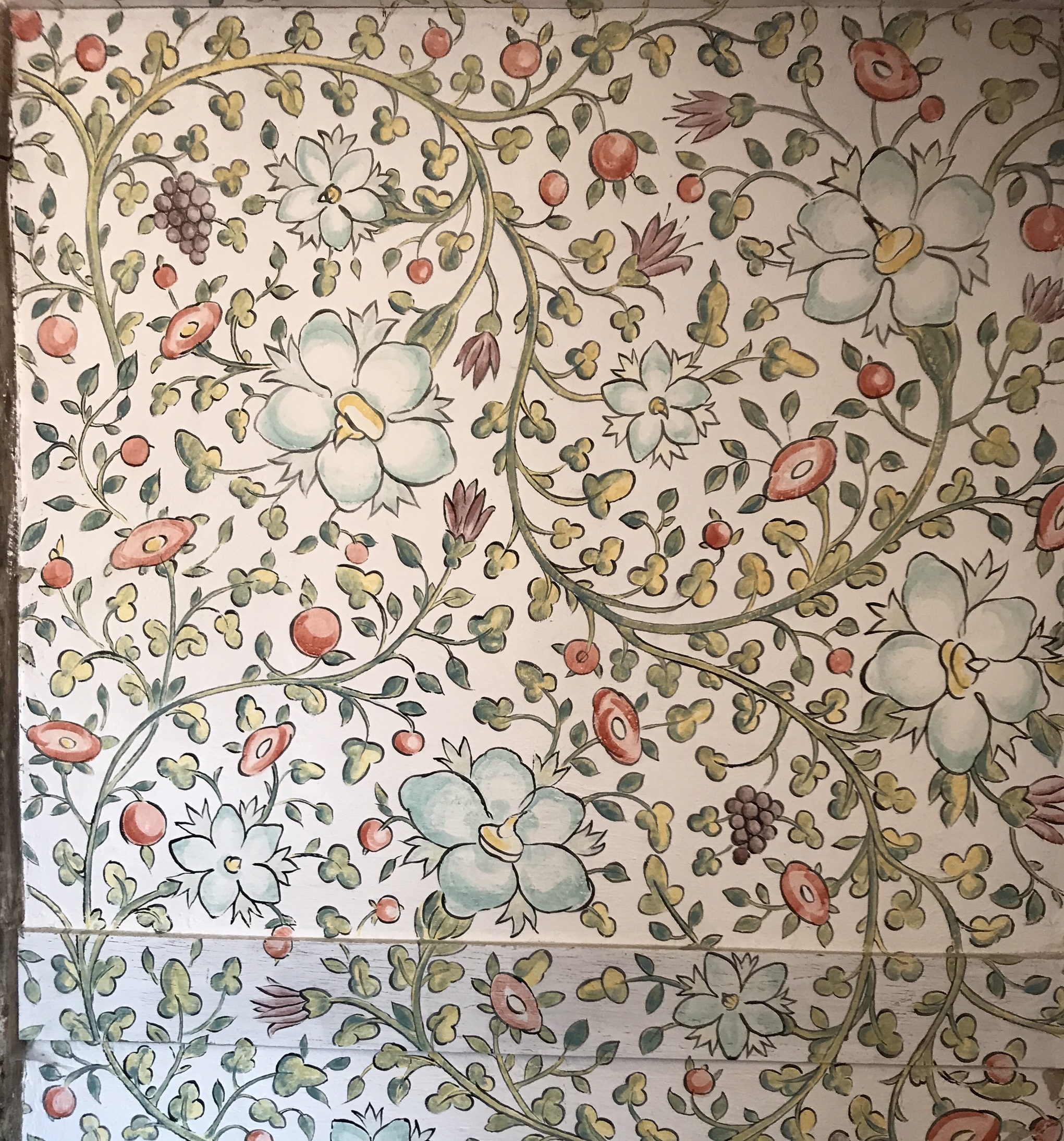 Recreating an early 17th century wallpainting from original fragments in Reigate at the Weald and Downland Museum.

An early C17th house extension from Reigate was donated to the Weald & Downland Museum. It was originally a rear extension to a medieval house at 43 High Street, Reigate. It contains two rooms with fine carved fireplaces and the remains of contemporary decorative wall paintings.

From the fragments of the original painting, Joy Huning recreated the painting across two walls of the room. The brief was ‘that the painting should be completed in the same way that the original painter would have painted it’  and that Joy ‘should just come along with pots of paint and paint directly on the wall’.

In order to follow the brief, rather than trace the design as one might if creating an exact copy, Joy painted completely freehand. Working on paper laid out on the floor of the room, Joy spent four days practice painting from the original to get into the character and feel of the original painting. When Joy’s recreated painting on paper had gained the same character as the original Joy painted directly onto the wall. The design wasn’t marked out in any way onto the wall but painted spontaneously from Joys research and practice of the original.

The black outline was painted first to lay out the design and then the other colours added.

Size paints were used, the pigments being ground in water and bound with size. The paints were mixed on site with the size being kept warm on a double boiler all day.  As far as possible the same pigments were used as found in the early 17th century.

This recreated painting was completed in the early 90’s and recently in 2018 I visited and took some images. The room is used for meetings and not now open to the public. The colours remain fresh and as good as 25 years ago. 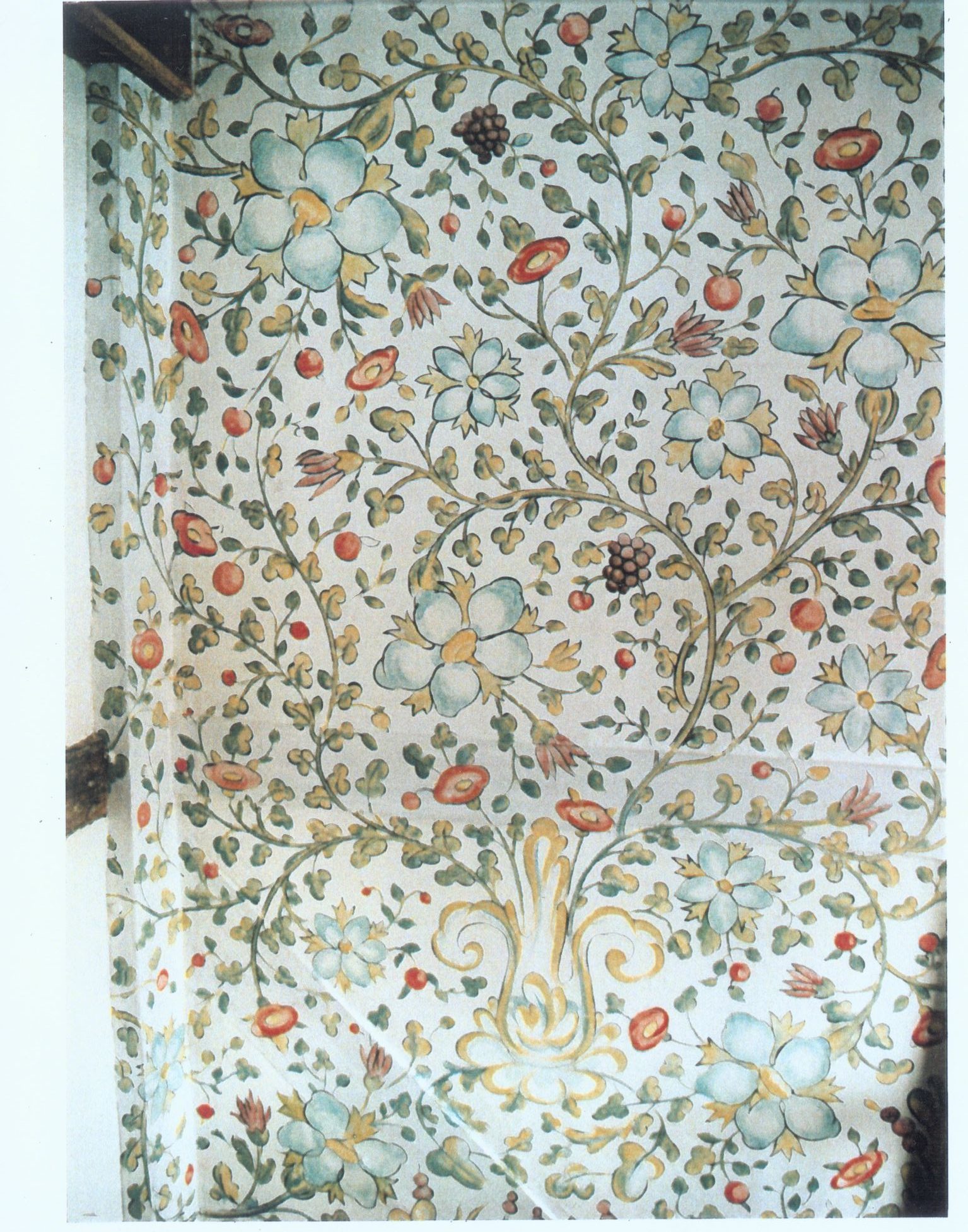 This photo was taken when the recreated painting was complete in the early 1990’s. 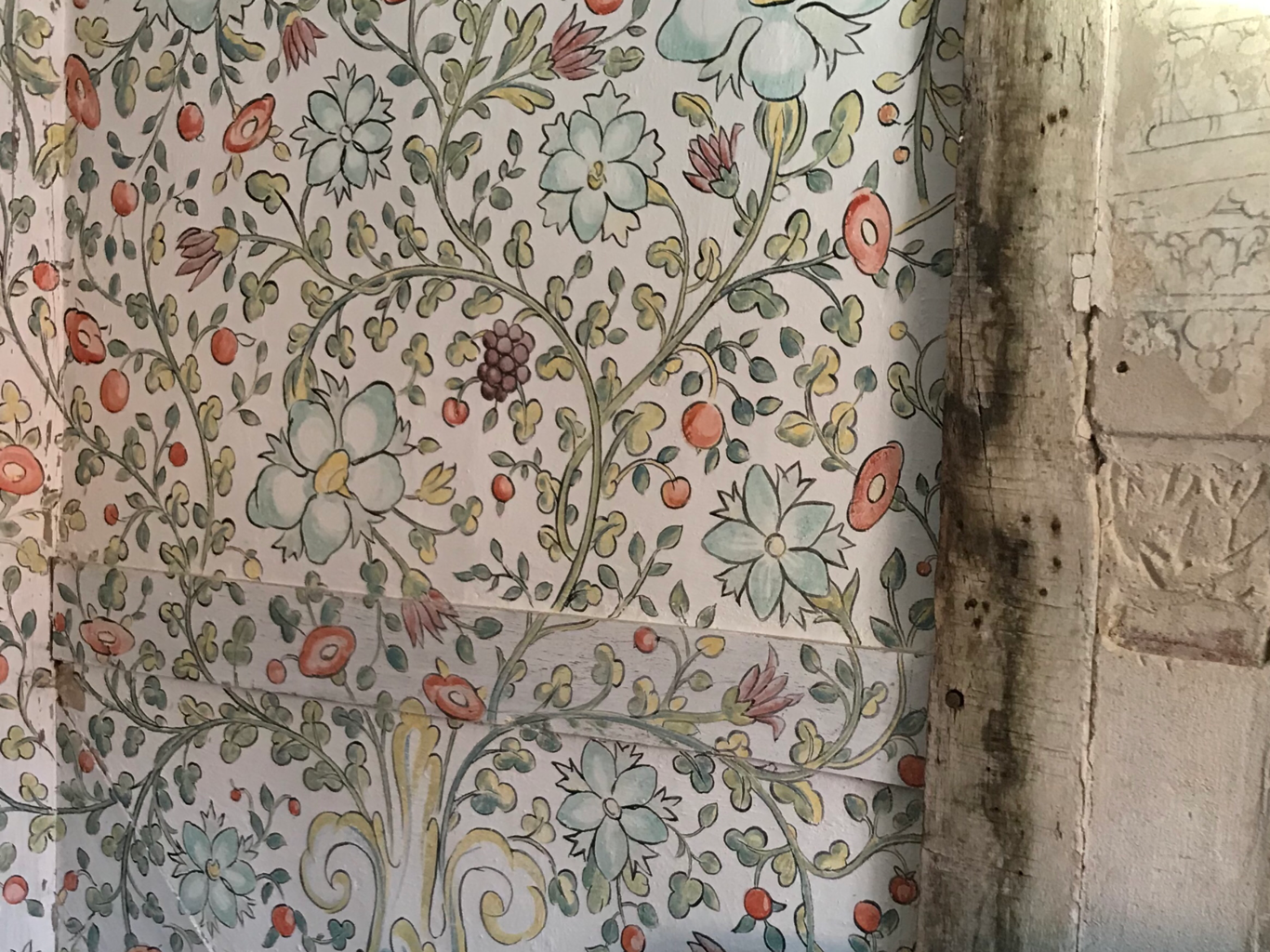 This image was taken in 2018 as a comparison to the images taken when the painting was completed in early 1990’s. Interesting to look for changes in the colours over 25 years

This photo was taken when the recreated painting was complete in the early 1990’s.

This image was taken in 2018 as a comparison to the images taken when the painting was completed in early 1990’s. Interesting to look for changes in the colours over 25 years

The two images above were taken when the painting was created in the early 1990’s (left image) and in 2018 (right hand image).  I thought it would be interesting to see how the colours might have changed over time. In general the painting would appear to have retained its colour. There is possibly a slight loss of the intensity of the yellow colour but this might be due to the difference in image quality. 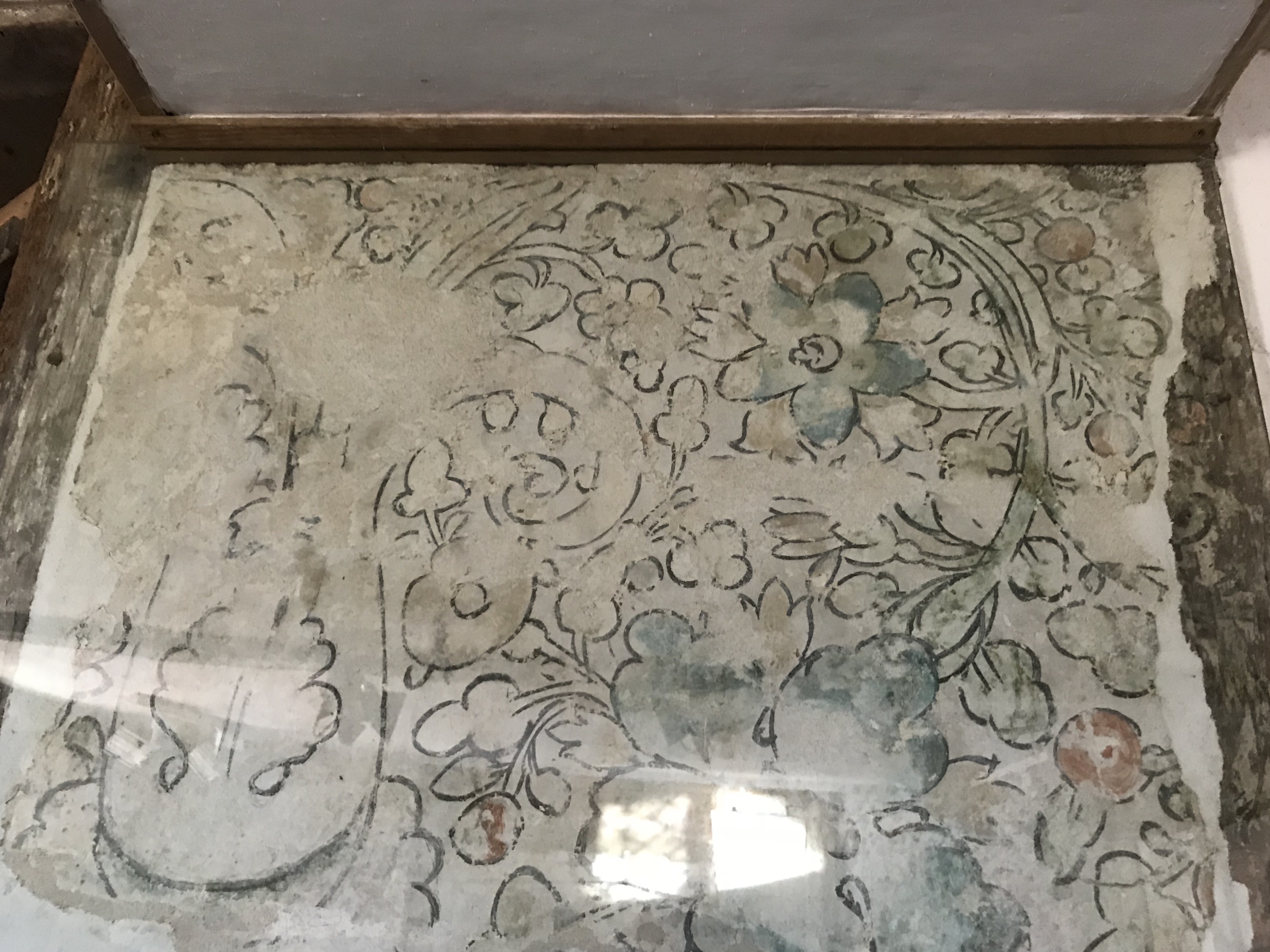 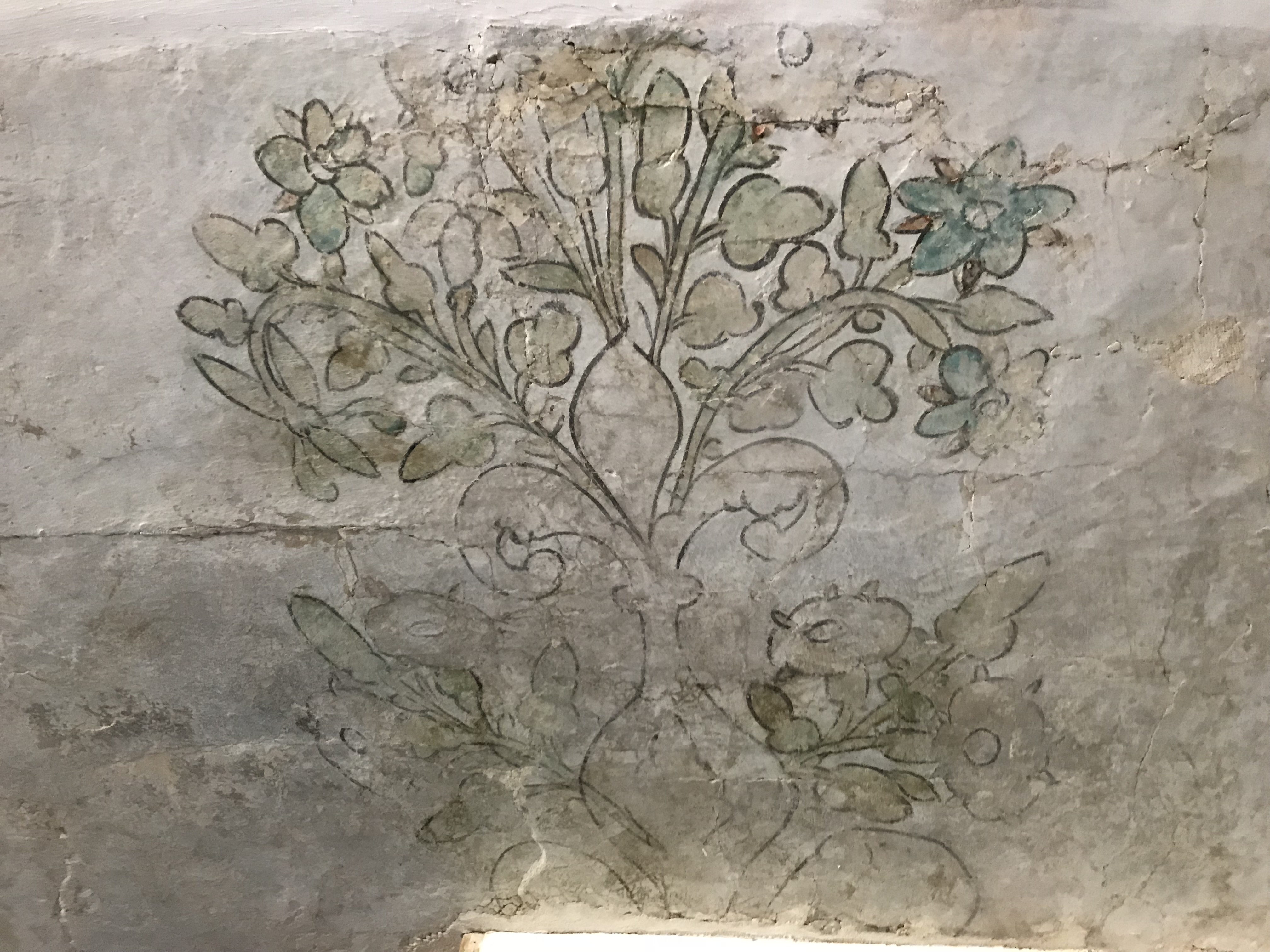 The two images above show the early C17th original paintings that were worked from for this recreated work.